What is a serial to Ethernet converter?

The Serial Device Server is also called Serial to Ethernet device, it is a device that can connect RS-232 or RS-422/485 serial devices, such as PLCs, meters, and sensors to an IP-based Ethernet LAN, making it possible for your computer to access serial devices anywhere and anytime over a local LAN or the Internet, it supports TCP server mode, TCP client mode, and UDP mode.

The Serial Device Server is a rugged,standalone device with a tiny embedded operating system and CPU, as well as the necessary software protocols, also equipped with the required hardware interfaces, such as RS-232, RS-422, and RS-485 ports, widely used in Data acquisition, Factory automation Security,Attendance,Entrance control and Medical automation. What is a serial to Ethernet converter used for?

As the popularity of serial device servers is closely related to the growing prevalence of Ethernet LANs in both commercial and industrial environments, serial to Ethernet devices have played a major role in the communications and industrial automation markets.

A serial to Ethernet converter is used when you want to connect a serial device that isn't network-enabled to a computer that either is too far away or simply doesn't have an appropriate serial port available, Since there are millions of legacy serial devices (most of which do not have built-in Ethernet port) still commonly used today. A serial device server is allowed to connect legacy serial devices to an Ethernet LAN/WAN, providing many more options for data acquisition, device management, and industrial control.

With flexible mechanical design, serial device servers support either on DIN Rail or wall installation, which provides more convenience for users to install the product according to application requirements.

UPCOM Industrial serial device servers provide 15KV ESD (Electrostatic Discharge) protection to ensure reliable performance and prevent possible damage, there is no need to worry about damage to the device server due to external electrostatic discharge.

There are various device server operation modes, mainly include TCP (Transmission Control Protocol) and UDP (User Datagram Protocol), both of which rely on the IP-layer to send data over a TCP/IP network.

In TCP Server Mode, the Serial server monitoring the set port, waits for the data sent by TCP client to connect to the Serial device, and realize Bi-directional data transmission between Serial Device and PC via the Serial server. As shown in the figure above, where the serial device server is connected to the console port of the file server. In this case, the file server could be set up in a remote location that is not easily accessed by the system administrator. By connecting the serial device server's Ethernet port to a LAN, the system administrator can access the PC's console management features from a host located on the same LAN, or on the Internet if the LAN is connected to a public network. Take a "card reader" for example, Once the card is swiped, the stored information is converted into a corresponding serial signal, which is then sent to the device server through the serial port of the device server. The device server, which would have already been set up to send data to a particular server application on a remote PC or device, forms the serial data into a TCP packet, requests a connection with the remote application, and then sends the packet across the Ethernet to the remote host.

In the UDP Mode, the Serial server sends the data of the Serial device to the specified IP network device in the form of UDP packet.The serial port server monitors the port and forwards all receive data to the serial port device.

The UDP Server/Client Mode of operation is designed for applications that require fast data transmission through UDP protocol layer. By using serial device servers with the UDP Server/Client functions, a serial device can transmit data to multiple destinations almost simultaneously. Due to the speedy feature of UDP and the Data Packing function, the serial device server turns traditional serial devices into powerful network-enabled devices. It is suitable for connecting input devices, such as scanners, card readers, fingerprint readers, and optical scanners. 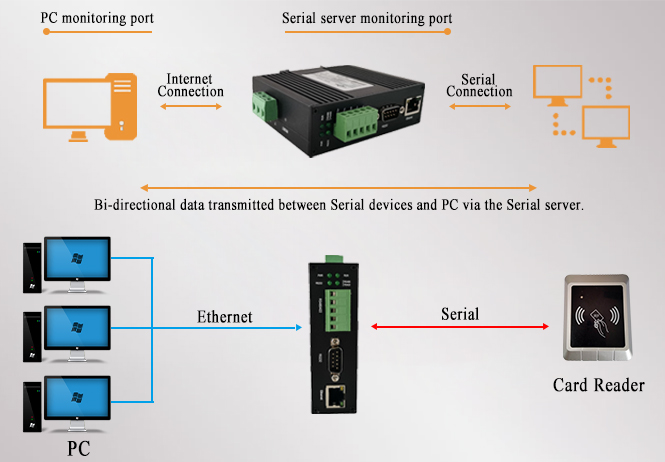 As shown in the figure above, the application dictates that card reader data should be sent to multiple host, all of which are connected to the Internet. The way to perform such a requirement is to configure the device server connected to the card reader for UDP Server/Client mode, and then set up the system so that data are sent to each of the hosts.

The photovoltaic power generation system is a green energy project, which is connected to the grid and transmits power to the grid. In this project, the MW1011 industrial serial server was used to convert the serial data into Ethernet format data, and the data was transmitted in the Ethernet network, which solved the data communication problem between different devices. The MW2244 serial server was used to connect the photovoltaic panel to form a self-healing ring structure, which can ensure that the communication of other sites will not be affected when the optical cable is accidentally disconnected or one of the equipment fails. The monitoring point data of the photovoltaic panel area is converted to Ethernet through the industrial serial server MW1011 and collected to the Layer 2 Industrial Managed Ethernet Switch IES1028-4GS, and the control room is connected with the site using single-mode optical fiber.