1. What Is Fiber Optic Cable

2. What is Single Mode Fiber

3. What Is Multi-Mode Fiber

What Is Fiber Optic Cable

The fiber optical cable is composed of Sinterklaas core and several layers of protective materials:

●  Cladding: The glass or plastic shield around the core. The cladding prevents light from escaping the core, effectively keeping the signal moving down the glass.

●  Core: A cylinder of glass or plastic and light traveling in the core.

◆  Transmission Rate: Comparing the speed of data transmission, fiber optic cables are more than a hundred times faster than the transmission speed of electrons on copper conductors, at present, copper cable reach up to 40 Gbps, while OM5 optical fiber can reach 100 Gbps.

◆  Transmission distance：Both fiber optic cable and copper fibers are experienced signal losses over long distances, but this attenuation is much greater with copper. Over 100 meters, it is estimated that the optical fiber will only lose 3% of the signal strength, while within the same distance, the copper cable will lose 94% of the signal strength.

◆   Electrical Isolation - Because fiber optic cables do not carry electricity, there is no need for transmitters and receivers to the ground.

◆   Appearance - Fiber optic cables are about a quarter the diameter and a tenth the weight of copper cables, making them easier to install and promoting better air circulation in the cabinet.

There are two basic modes of fiber optic cabling: single mode and multi-mode.

Single mode and multimode cables are available in Duplex and Simplex

What is Single Mode Fiber

Single mode optical fiber (SMF) is designed to carry light with a single mode, which means that light wave travels straight down the center of the core without bouncing off the edges.

Single mode fibers have a small core size (usually 9 μm) that permits only one mode or ray of light to be transmitted in the range from 1260nm to 1625nm, Unlike multi-mode, single-mode doesn’t have different light paths that reflect light off the cladding but instead has a single light beam, so there is almost no light reflection when light passes through the single mode fiber core. This will lower fiber attenuation and create the ability for the signal to travel further.

Here are some features of single-mode fiber:

●  SMF core diameter is about 9μm. The cladding diameter of SMF is 125μm.

●  The source of optical signals in SMF is a Laser or laser diodes.

●  In theory, SMF offers unlimited bandwidth because it provides a single light transmission mode at a time.

●  The color-coding or sheath color for an SMF is yellow for non-military applications.

●  The small core size helps to reduce dispersion and allows longer transmission distances to be achieved.

●  High transfer rates use for long distances such as WAN connection.

OS1: OS1 is the first type of SMF compliant with ITU-T G.652A/B/C/D. the optical fiber core diameter is about 8 to 9μm. OS1 cabling is tight-buffered construction, which is widely used for indoor applications, such as campus or data center, the indoor fiber has greater loss per kilometer than OS2 outdoor fiber. the maximum attenuation for OS1 is 1.0 db/km, and maximum transmission distance can reach to 2km.

OS2: OS2 is a comparatively better type of SMF. It is compliant with ITU-T G.652C and G.652D, explicitly applier to the low-water-peak fibers, and these low-water-peak fiber are usually used for CWDM (Coarse Wavelength Division Multiplexing),It features the same diameter of 8 to 9μm, but OS2 cabling is loose-tube design, the signal suffers a negligible attenuation of 0.4dB/km. Due to lower attenuation, the signal strength remains consistent throughout the transmission. the maximum transmission distance of OS2 single mode fiber can reach over 10 km, so this type of SMF is preferred for long-distance and outdoor optical fiber installations such as street, seabed.

All of these differences between OS1 and OS2 discussed above are listed in the table below.

Single-mode fibers can also be classified according to industry standards:

If you want to use for the indoor application and distance is under 2km,then OS1 is a better choice, and it’s much cheaper than OS2 to save your cost, however, if used for outdoor applications, and the distance is over 10km, then you should choose OS2. The OS2 single mode fiber optic cables are ideal for connecting 1G/10G/40G/100G Ethernet connections, meeting the requirements of high performance with long distances.

What Is Multi-Mode Fiber

Multi-mode fiber uses a large diameter glass core size of either 50um or 62.5um which provides multiple modes or pathways for light to travel. The multiple modes allow more light (mainly data) to travel through the cable.

Multimode optical fiber is designed to use VCSEL lasers to transmit light in the 800nm-1300nm wavelength range. However, at longer distances, the light will start to experience dispersion (distortion in light) which can limit data transmissions through unclear, incomplete signal on the receiver end.

Due to distance limitations, multimode optic fibers have been widely used in many short-distance applications of less than 1000m, deployed for applications inside buildings or between sites of close proximity like campus networks, data centers, municipal complexes, Local Area Networks (LAN), and so on. 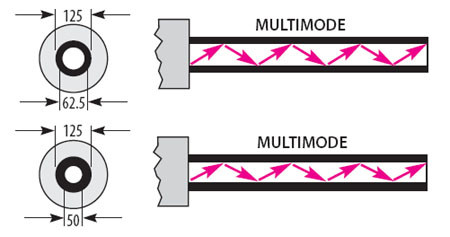 ●  The source of optical signals in MMF are either light-emitting diode (LEDs) or vertical-cavity surface-emitting lasers (VCSELs).

●  The bandwidth of MMF is limited due to modal dispersion. the theoretical value of MMF bandwidth is 28000MHz*km.

●  The color-coding or sheath color for an MMF is an orange or aqua jacket.

●  Transmitters and receivers are more economical

How Many Types of Multimode Fiber?

OM1 fibers usually have an orange jacket and a core size of 62.5 μm. and is most commonly used in 100M Ethernet applications, usually using LED light source.

OM2 fiber is also equipped with an orange jacket and uses a LED light source but with a smaller core size of 50 μm. It supports up to 10 Gigabit Ethernet up to 82 meters but is more commonly used in 1 Gigabit Ethernet applications.

OM4 fiber is fully backwards compatible with OM3 fiber and shares the same unique aqua jacket. OM4 is specifically developed for VSCEL laser transmission. Compared with OM3’s 300M, it allows up to 550m of 10 Gig/s link distances. And it can run 40/100GB up to 150 meters using MPO connectors.

OM5 fiber, also known as WBMMF (wideband multimode fiber), is the latest type of multimode fiber, and it is backwards compatible with OM4. Its core size is the same as OM2, OM3, and OM4. The color of OM5 fiber jacket is lime green. It is designed and specified to support at least four WDM channels at a minimum speed of 28Gbps per channel through the 850-953 nm window.

The mainly difference lies in diameter, jacket color, optical source and bandwidth, which is shown as follows: 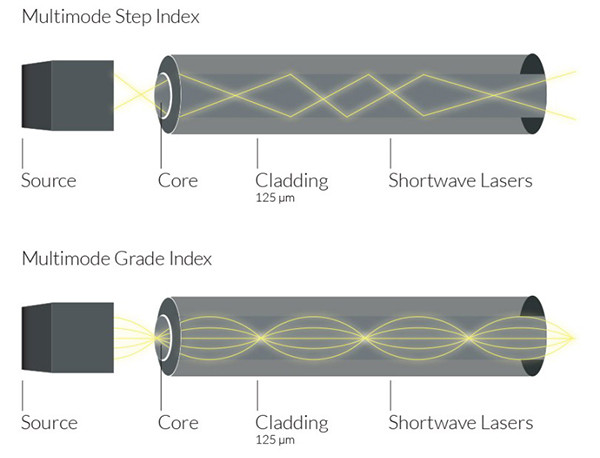 Single mode cables use a laser as light source, which can generate high power, precisely controlled light with wavelength of 1310nm and 1550nm. While multimode fiber usually use low-cost light sources, such as LEDs(light-emitting diodes) and VCSELs (vertical cavity surface-emitting laser) that operate at 850nm and 1300nm wavelengths.

The bandwidth of a single mode fiber is theoretically unlimited ,because it only allows one light mode to pass through at a time.

Multiple modes/light paths travel down a multimode fiber cable, it only offers high bandwidth over a short distance, when running at longer distances, modal dispersion (distortion) becomes an issue, As the signaling bandwidth increases, the range of the distance decreases, and vice versa.

The cost of Multimode cable and single-mode cables are roughly the same. But the whole multimode fibre systems are much cheaper than single-mode fibre systems and considered more cost-effective in the right application. This is because single mode fibers normally use solid-state laser diodes that are much more expensive than LED or VCSEL components. Multimode transceivers are usually two times cheaper than single-mode transceivers.

The main differences between single mode and multimode fiber...

Differences Between Managed vs Unmanaged Switches

There are five main differences between Managed and unmanag...

How to Choose The Right Industrial Ethernet Switch

There are 5 types of commonly used Industrial Ethernet Switc...