With the pursuit of transmission rate, transmission quality, and transmission cost, digital systems such as PCM (Pulse Code Modulation) and TDM (Time Division Multiplexing) technology have been widely used in communication systems.

In PDH (Plesiochronous digital hierarchy), two basic PCM communication systems are used as the basis, one is the T1 system recommended by ANSI, and the other is the E1 system recommended by ITU-T. The T1 system is widely used mainly in North America (the J1 used in Japan is basically similar to the T1), while the E1 system is used in Europe and other Asian countries.

From this article, we will learn.

PCM (Pulse code modulation) is a method used to converter analog signals, such as a telephone call, to digital signals, In PCM, an analog signal is sampled and converted to a series of binary bits.

PCM consists of three steps: sampling, quantizing, and encoding, you can see the whole process of PCM as shown in the figure below. 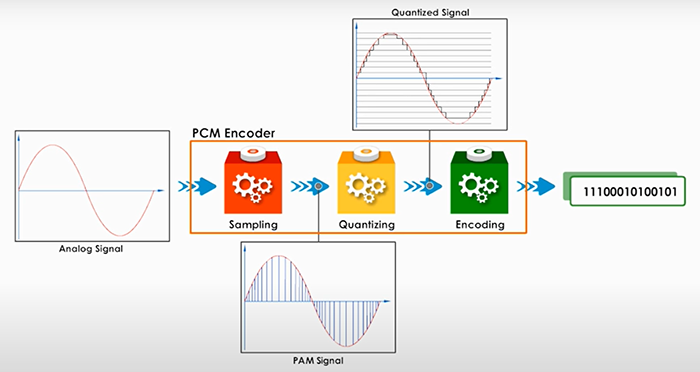 Sampling is a process of finding a sufficient number of samples, so that the original signal can be represented by those samples completely and it should be possible to reconstruct the original signal. Samples are basically discrete values of amplitudes with a regular interval over time. that is why the process of sampling is also called PAM (Pulse Amplitude Modulation).

PAM signal is simply the result of series of these discrete sample values. The number of samples per second is called sample rate.

Sampling converts a time-varying signal into a discrete-time signal, a sequence of real numbers. Real numbers are any number you could find on a line segment. On any line segment, we can find an infinite set of real numbers. However, we only need a finite set of values which can be converted to binary numbers. Quantizing process exactly server this purpose, Quantizing process is the process of rounding off the amplitudes of flat top samples a manageable number of levels. We try to make each sample to match each level because each level has a specific bit value.

In Summary, Sampling converts a time-varying signal into a discrete-time signal, a sequence of real numbers. Sampling is like drawing vertical lines with a regular interval, Quantizing process is like drawing horizontal lines and each line has a specific measurable bit value, and then make each sample flat top match a specific horizontal line. In this way, each sample can be uniformly encoded with specific bit values.

TDM (Time Division Multiplexing), that is, a certain channel is divided according to time, and the quantized value of each voice signal occupies a certain fixed time interval in a certain order, that is, the so-called time slot. In this way, the multiple signals are multiplexed into a high-speed composite digital signal, that is, a group signal, in a certain structure in a time-division multiplexing manner. The transmission of each signal is relatively independent.

TDM technology is used to multiplex a number of digital voice channels onto a single, higher speed line. the time domain is divided into several recurrent timeslots of fixed length, one for each sub-channel and one TDM frame consists of one timeslot per sub-channel.

The T1 line uses two wire pairs (one for sending, one for receiving) and time division multiplexing (TDM) to interleave 24channels 64-Kbps voice or data. The standard T1 frame is 193 bits, which holds 24 8-bit voice samples and one synchronization bit with 8,000 frames transmitted per second.

T1 lines are widely used to connect an organization's PBX to the telephone company or to connect a local network (LAN) to an Internet provider (ISP). They are also used to access the internet in buildings without DSL, cable or fixed wireless coverage.

The basics E1 Carrier features are shown as below:

●  Transmission of signals at the rate of 1.544 Mbps, here is how it is calculated:

●  A T1 line is point-to-point. T1 lines may be used fractionally or at their full bandwidth.

A basic T1 frame DS1 (digital signal-level one) contains 24 DS0 (64kbps) time slots, numbered from 1 to 24, each time slot has 8 bits, a total of 192 bits. The T1 basic frame also includes an F bit (framing bit), which is used as a frame synchronization bit to indicate the end of the current frame and the beginning of the next frame. The transmission rate of DS1=193*8k= 1.544 Mbps.

●  T1 frame is constructed of 24 timelsots (each timeslots is of 8 bits) plus one framing bit added.

●  Each TS is regarded as a channel of 64 kbit/s bandwidth.

●  Framing bit creates a channel of 8kbit/s and is used for messages, synchronization, and alarms.

●  A frame is the basic building block for the SF and the ESF.

The SF frame format (also known as the D4 frame format) is the most commonly used format in the current public switched telephone network. Each SF consists of 12 basic DS1 frames. The 193th bit of each frame is used as the control bit, and the 12th 193bit of the SF Combine them to form a 12-bit control word (eg 100011011100) to provide frame synchronization and signaling management information. The odd bits of the 12-bit control word of the SF frame (called the Ft bit, and the corresponding frame is called the terminal frame) are used to mark the frame and superframe boundary so that the receiving device can correctly process user data; the even bits of the control word (called Fs) Bit, the corresponding frame is called signaling frame) used to carry signaling flags.

T1 commonly used line codes include B8ZS code and AMI code. B8ZS is the abbreviation of Bipolar with 8-Zero Substitution, mainly to solve the defect that the timing signal cannot be extracted when the long 0 appears in the AMI coding format. 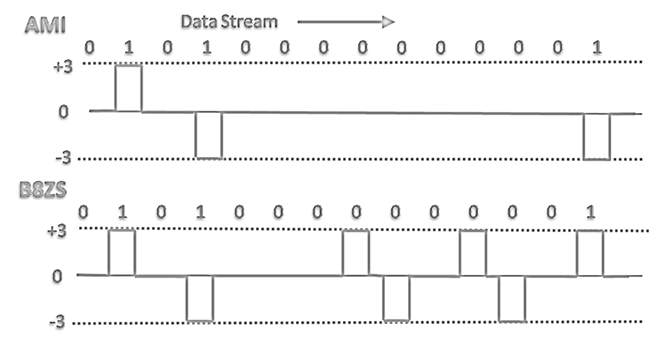 The E1 line uses two wire pairs (one for sending, one for receiving) and time division multiplexing (TDM) to transmit 32channels 64-Kbps voice or data. it is a 2.048 Mbps point-to-point dedicated, digital circuit provided by the telephone companies in Europe.E1 and T1 lines can be interconnected for international use.

The basics E1 Carrier features are shown as below:

●  E1 is a digital communication link that enables the transmission of voice, data, and video signals at the rate of 2.048 million bits per second (Mbps). here is how it is calculated:

●  Deployed primarily in Europe and Asia.

●  Data is sent over one signal pair and simultaneously received on another signal pair. (full duplex transmission).

●  Before the data is output to the E1 line, it must be conditioned by the line driver to meet the electrical characteristics of the E1 span (pulse width, pulse height, and pulse voltages).

●  Line driver converts the unipolar signal output from the multiplexer into a bipolar signal (each successive digital 1 has the opposite polarity of the previous one).

In the Framed  mode, all 32 slots are used for data, detection of boundaries is gained with TS0.

In the Multi-Framed mode, TS0 is used for synchronization, all other channels are unaffected.

The E1 multiframe consists of 16 consecutive E1 frames, the extra features to multi-frame is the addition of a Cyclic Redundancy Check (CRC), and Channel Associated Signaling (CAS). 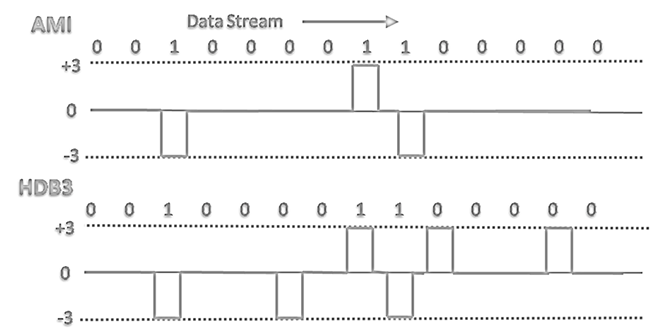 UPCOM provides various types of devices with E1 interface that works with E1 line, such as 4-30 channels Voice over E1, E1 to Ethernet Converters, Ethernet Over PDH, PDH, SDH, details as below:

E1 to Ethernet converter (also refered to as Ethernet over E1 TDM converter,G703 to ethernet converter), which provides high-speed LAN-to-WAN connectivity. Plugging directly into the 10/100Base-T port of a hub or LAN switch, it provides E1 access at connection data rates of 2.048 Mbps. The ethernet over E1 converter is a perfect choice for internet access as well as LAN-to-LAN services.

Ethernet-over-PDH (EoPDH) is a collection of technologies and standards that allow the transport of native Ethernet frames over the well-established PDH telecommunications infrastructure. This enables carriers to make use of the extensive network of legacy PDH and SDH equipment to provide new Ethernet-centric services.

The PDH design allows the streaming of data without having isochronous (clocks running at identical times, perfectly synchronized) to synchronize the signal exchanges. PDH clocks are running very close, but not exactly in time with one another so that when multiplexing, signal arrival times may differ as the transmission rates are directly linked to the clock rate.

PDH allows each stream of a multiplexed signal to be bit stuffed to compensate for the timing differences so that the original data stream could be reconstituted exactly as it was sent.

The main differences between single mode and multimode fiber...

Differences Between Managed vs Unmanaged Switches

There are five main differences between Managed and unmanag...

How to Choose The Right Industrial Ethernet Switch

There are 5 types of commonly used Industrial Ethernet Switc...